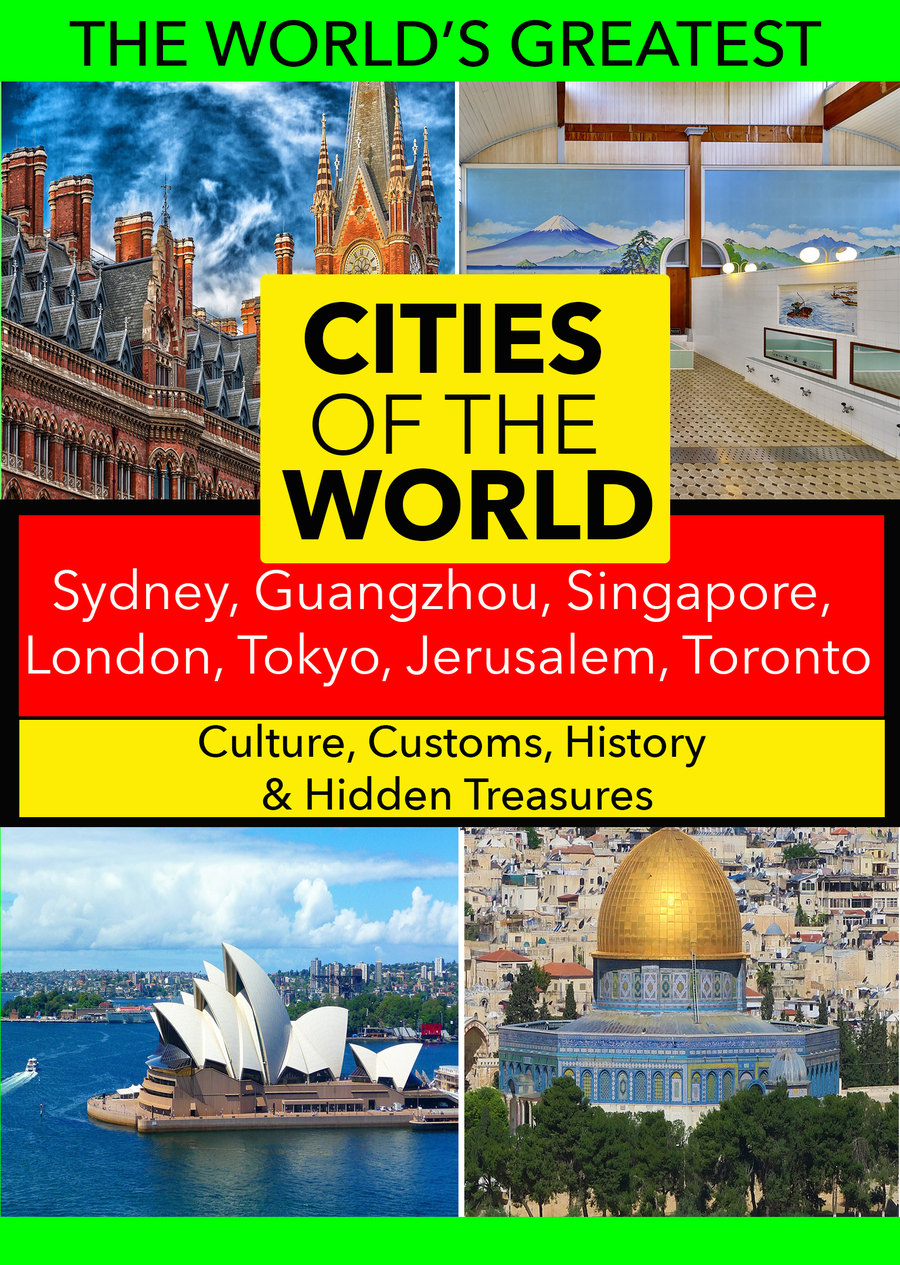 Featuring Sydney, Guangzhou, Singapore, London, Tokyo, Jerusalem, Toronto. SYDNEY Australia's largest city is often regarded as one of the most beautiful in the world. The place offers an attractive mix of modern architecture, historical landmarks, breathtaking views, and relaxing gardens, Australia's most famous man-made attraction, and a worldwide icon, too, is the Sydney Opera House, that's home to over 1,500 performances a year. GUANGZHOU was once called Canton. It is the capital of Guangdong Province and is the host venue for the busy Canton Fair. Thousands of tourists visit the city for a number of reasons: the wonderful scenery, the local culture, and the authentic cuisine. The Pearl River, the third longest river in China, is certainly a breathtaking view. The Nansha wetland park is a great relaxing place to experience the natural beauty of Guangzhou. SINGAPORE One of Asia's top city attractions and a quick-developing place for business, A unique cosmopolitan culture, a harmonious marriage of the old and the new. With a blend of high-rising modern skyscrapers alongside heritage buildings all around this island-city. Transportation is also fast and efficient for the locals and tourists The award-winning Changi Airport provides connections with over 100 airlines flying to more than 200 cities around the world. LONDON is known as the world's financial capital, along with New York. and is also Europe's cultural hub with more than 300 languages spoken. Home to the most amazing attractions with panoramic view of the iconic skyline via the London Eye or View from The Shard. TOKYO The world's most populous metropolitan area with 35 million people and one of the most expensive cities, Greater Tokyo. One of the most popular sites is the Hachiko Statue, a tribute to the dog loyal to his master. Hachiko, who died of a heart infection in 1935, is regarded a national celebrity and has a bronze statue of him outside Shibuya Station, in his honor. JERUSALEM An ancient city going back to more than 3000 years, Jerusalem is one of the rare places that is layered with hundreds of years of history, while also being a bustling modern city. A visit to Jerusalem offers you world-class cuisine, plenty of religious and historical landmarks, and, archeological relics. Also known as the Western Wall or Kotel, the Wailing Wall is the holiest place in Judaism. Millions of tourists arrive here each year to pray. The ancient wall is believed to be the last remnant of the Second Temple built by Solomon. TORONTO Home to about 2.7 million people, Toronto is Canada's largest city. And the sprawling city filled with distinct neighborhoods offers a diverse mix of attractions to see, places to visit, and destinations to check out. Perhaps the most popular is the Niagara Falls, one of the seven wonders of the world. A highly-recommended way to see the famous falls is through the Maid of the Mist boat ride, which allows you to get right up close to it and immerse yourself in its enormity. Another popular site is the Dundas Square, often compared to New York's Times Square.

BACK TO: Cities of the World
PREVIOUS TITLE NEXT TITLE