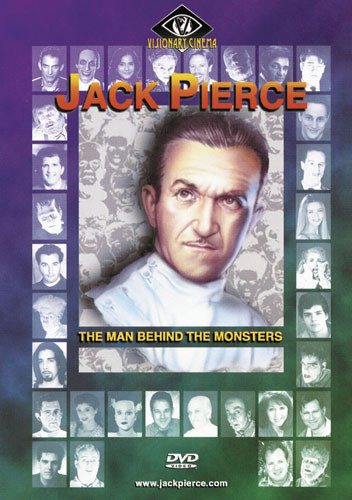 Jack Pierce The Man Behind The Monsters

One of the cinematic pioneers & masters of make-up of the 20th century & the legendary monster-maker. This program re-creates 15 of Pierce’s characters with makeup wizard Robert Burman. Watch as costumes were created, sets constructed and the many hours of makeup preparation. Actors were lifecasted, makeups were sculpted, molds were made and makeup appliances were fabricated in prosthetic materials. Bonus features include archival footage of Jack Pierce behind the scenes & memorabilia section!

"I met Jack Pierce - he was one of the great pioneers of special effects makeup. He created amazing motion picture makeups with techniques, materials and talent that few knew how to use. His makeups would so totally transform an actor into a believable screen image that it would change the lives of the viewing audience forever. It should be noted that through his creative shows and DVDs, as in the one for Pierce and others, Scott Essman properly pays homage to our makeup greats by preserving their historical cinematic importance." --- Michael Westmore, Oscar-Winning Makeup Artist / 18-Year-Long Department Head of Makeup for STAR TREK

BACK TO: Animation, Special & Visual Effects
PREVIOUS TITLE NEXT TITLE