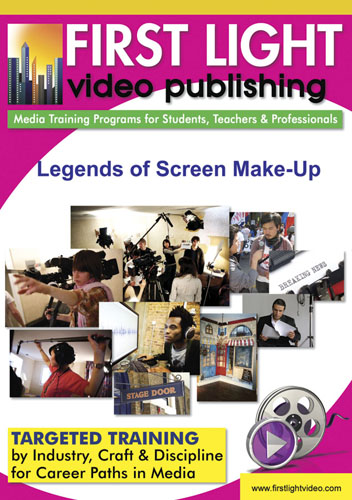 This three program collection takes a look back on the cinematic pioneers & masters of make up of the 20th century featuring John Chambers (Planet of the Apes), Dick Smith (The Exorcist), and Jack Dawn (The Wizard of Oz). John Chambers: With very few and special exceptions, there is no more influential an individual in the modern world of special makeup effects than John Chambers. Through groundbreaking cinematic triumphs as pivotal as Planet of the Apes, Chambers 30-year career in Hollywood solidified his legacy as a technical master using plastic laminate, foam latex, mold-making, and prosthetic materials. Chambers left a legacy of excellence that continues to ripple through the work of his many peers and proteges. Dick Smith: A living legend and master of special makeup effects. This program features exclusive interviews of Dick with his closest protégés, including Rick Baker, Kevin Haney, and Craig Reardon. It includes dozens of rare photos and film clips of Dick and his rarest make-ups, many from his early days in television, plus photos and footage from his classic films, including The Exorcist, Amadeus, and many others. Jack Dawn: A special behind-the-scenes look at the tribute to honor the makeup genius of Jack Dawn and his team, from the 60-year-old classic film - The Wizard of Oz. Watch the authentic recreation of seven characters from the film, led by a dream team of make-up artists. This unique celebration also features current creature king Rick Baker, director Ron Underwood and Howard Smit (who applied Munchkin makeups in the original film).

"In the history of motion pictures, many names of creative individuals who contributed their skills to the great and memorable films are known and recognized by an appreciative public. Certainly in the craft and art of creative make-up, there is no man more highly admired and honored for his personal vision and technical and artistic excellence than Dick Smith. In 1996, Scott Essman gathered together a number of people who were all fans of Dick Smith, and many of these were makeup artists themselves, highly-indebted to him both personally and generally for his shining example and invaluable counsel. One of them was me. For anyone interested in the allied crafts of motion picture-making, and make-up in particular, I can almost guarantee they will enjoy these programs for who and what they celebrate and honor." --- Craig Reardon, creature creator and makeup artist - E.T., POLTERGEIST, TWILIGHT ZONE: THE MOVIE

BACK TO: Animation, Special & Visual Effects
PREVIOUS TITLE NEXT TITLE