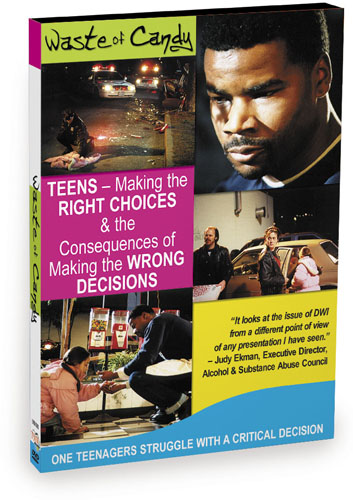 Waste of Candy is an award-winning short film that challenges our moral and ethical responsibility to ourselves and to society. The film explores one teenagerOs struggle with a critical decision: should he try to stop a seemingly intoxicated couple from driving with their young child? The film gives two scenarios: Scenario One: The teenager does nothing. He lets the couple get in their car with their little girl and the car crashes and the girl is killed. Scenario Two: The teenager stops the couple from driving and calls the Police. This program makes an important point for students to consider. Taking action against drunk driving (or any irresponsible act) may seem like an unpopular decision, however they must consider the possible consequences if they fail to take action. Students will be challenged to explore their moral and ethical responsibilities to themselves and to society. Students Will Learn: More about drinking, abuse, trying to stop a person from getting behind the wheel and HOW you can CHANGE someoneOs actions. How you can PREVENT situations like this from happening even as a teenager. To TAKE ACTION when you believe something is wrong. Taking a stand against drinking and driving it can be difficult and things might go wrong, but you must WEIGH THE POSSIBILITIES if you donOt act. For Discussion: If you see something happening that you feel is wrong do you have a social responsibility to do something about it? What are the pluses and minuses about trying to help a friend that is abusing alcohol or drugs? What makes it difficult to cross social boundaries?

OA perfect program for junior high through college-level classes.O Library Journal. OIt looks at the issue of DWI from a different point of view of any presentation I have seen.O Judy Ekman, Executive Director, Alcohol & Substance Abuse Council. This film received high ratings from students at the SADD Safe Spring Seminar, where students said they learned OE more about drinking, abuse, trying to stop a person from getting behind the wheel and how you can do it.O OThis program will have great benefit in our efforts to reach todayOs youth in an Underage Drinking and Impaired Driving program. Highly praised for its quality, by New York Police Traffic Supervisors statewide.O Sgt. McDonnell, New York State Troopers Traffic Services.