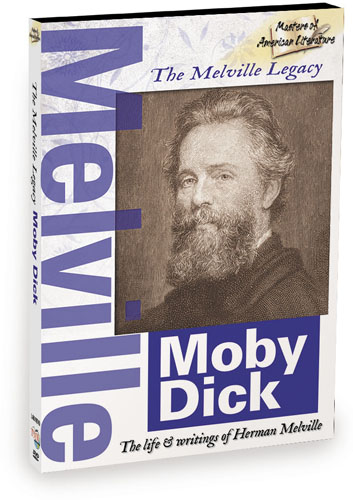 ABOUT THE AUTHOR: The Melville Legacy explores the life and works of Herman Melville (1819-1891), one of America's most renowned 19th century authors. In his novels, Typee, Omoo, and Moby Dick, Melville demonstrates his mastery of the epic sea story, the latter considered by many to be the preeminent American novel. This program is part of a series of three Masters of American Literature series produced, directed and hosted by James H. Bride ll including "The Hawthorne Legacy," and "The Mark Twain Legacy." ABOUT THE PROGRAM: The Melville Legacy offers students and teachers a complete overview of the life, times and writing of Herman Melville, focusing on Moby Dick. Divided into five chapters each program is intended for class and group discussion. Experienced scholars will explore themes, ideas and language in Moby Dick and analyze Melville's distinctive writing style. The program materials will demonstrate why Melville is considered a major figure in world literature. CHAPTER CONTENT: Chapter 1 Brief Melville Biography: Herman Melville (1819-1891) was born in New York City. He moved to Albany after his father, Allen, went into bankruptcy and died when Melville was twelve years old. Melville left school at 15, working at various jobs to help support his family, before seeking adventure on the high seas. Upon his return he married Elizabeth Shaw, daughter of the Chief Justice of Massachusetts, and began a long and distinguished writing career, although readers of the time had difficulty with the complex symbolism of Moby Dick. The greatness of the novel was not recognized until thirty years after his death. Chapter 2 Writing Moby Dick: Melville was the first major 19th century American novelist to write and successfully publish whaling and other sea lore stories. Ironically, Melville wrote Moby Dick many years after leaving the life of the sea, though he drew much from his four years in the South Seas. His thorough knowledge of the Bible and Shakespeare shaped his narrative and characters in Moby Dick. Chapter 3 Melville's Literary Perspective: Melville's thorough knowledge of the Bible and Shakespeare, interwoven with his experiences, shaped his narrative and characters in Moby Dick. In his melodic rhetorical style, Melville uses his knowledge of the whaling industry to spin a metaphoric tale of the high seas that is fatalistic in its critique of American class prejudice and the nature of good and evil. By chance Melville and Nathaniel Hawthorne - The Hawthorne Legacy- became great friends while living in the Berkshires, in the western part of Massachusetts. The two exchanged ideas, letters and experiences that have become an enduring legacy in American literary friendships. In fact, Hawthorne's name was listed on the Moby Dick Dedication page. Chapter 4 "Call Me Ishmael": The opening sentence identifying the narrator of Moby Dick, calls upon biblical references which Melville knew by heart. Similarly, Melville draws on his knowledge of Shakespeare in portraying the master of the whale ship Pequot, Captain Ahab. These opening three words become the basis from which the narrative perspective develops. Chapter 5 A Whale of a Story: This twelve minute segment offers specific interpretations of several Moby Dick chapters; "Loomings," "The Quarterdeck" and "The Doubloon." Additionally, extensive whaling footage at the beginning of the 20th century features men at sea killing a whale and then cutting-it on board the whale ship while under sail. Each presenter summarizes his/her thoughts about Moby Dick's relevance in today's world. ABOUT THE HOST & PRESENTERS: For over twenty years James H. Bride II, Host, has been producing and directing educational documentaries focusing on American and British writers. The Melville Legacy presenters include: John Bryant, Professor at Hofstra University; Merton Sealts, Emeritus, University of Wisconsin; Laurie Robertson-Laurent, Melville biographer; Martin Bickman, Professor University of Colorado; Walter Bezanson, Emeritus, Rutgers University.

3 1/2 Stars. Recommended. "Offering an in-depth look at one of the primary contenders for the "Great American Novel," The Melville Legacy: Moby Dick - hosted by James H. Bride III - is divided into five sections that deal with Herman Melville and his masterpiece. A brief biography of the author is followed by segments focusing on the writing of his major work, including Melville's writing style, insights on how his knowledge of Shakespeare and the Bible shaped the narrative and characters, and interpretations of several chapters, with explorations of moral and social issues that remain relevant today. Archival footage and photos are combined with location footage shot in Massachusetts at Melville's home and the seaside docks. Interspersed throughuot are interviews with a variety of Melville scholars and biographers, each bringing a unique perspective to the subject." - Video Librarian.

BACK TO: Masters of American Literature
PREVIOUS TITLE NEXT TITLE