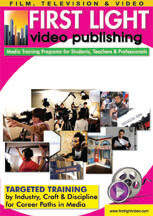 The Hold Up An Editing Exercise With Roger Ebert

For Computer Based Editing Systems. One of the most widely used training film for editing students. Nationally syndicated film critic Roger Ebert takes students from rushes to the fine cut of a dramatic band robbery scene. Mr. Ebert?s commentary provides insights into basic editing techniques such as matching action, parallel editing and continuity as well as the effects of camera angles, point of view and reaction shots. The film concludes with two edited versions, illustrating the widely different approaches an editor might take in assembling the sequence. Unedited, slated rushes are available in various video and film formats, providing students with an opportunity to edit their own version of the scene. The sequence is designed so that it can be edited as a silent film or with single or double system sound. The DVD version includes the instructional film with the Roger Ebert commentary. Note: DVD, CDROM, Rushes Are All Available For Purchase Individually.

?A classic profile of how to use camera angles, sound and effects to create effective tension-filled drama.? - Professor Robert Johnson, Jr., Framingham State College. ?I am very pleased. Exactly what I needed for the course.? - Warren Carter, TV Production, Golden West College.

BACK TO: The Hold Up An Editing Exercise
PREVIOUS TITLE NEXT TITLE