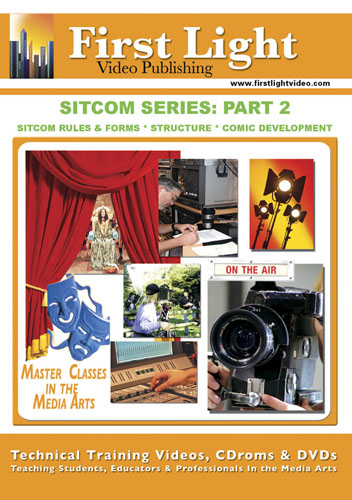 2 DVD Set: Sitcom Rules & Forms and Structure & Comic Development. This series is valuable for anyone writing comedy and absolutely essential for writers attempting the highly structured and demanding sitcom form. Featuring producer/creator Norma Safford Vela (Roseanne, Designing Women) writer and lecturer John Vorhaus (The Wonder Years, Married With Children) and writer/producer Russ Woody (Murphy Brown, Slap Maxwell) as they explore every aspect of the sitcom craft. Sitcom Rules & Forms: Each sitcom has its own inner rules and it is vital for the writer to understand them. In this program John Vorhaus describes what he calls the "inner game" of the sitcom. He maps out the rules for eight basic types of sitcoms, including what he calls "center and eccentrics," "fish out of water," the star vehicle, the ensemble comedy and the comedy of character conflict. Structure & Comic Development: John Vorhaus defines seven steps of the "comic through line" through which each sitcom story unfolds. The hero's goal is established, a door opens on the possibility of success, the hero appears to attain his desire, a monkey wrench is thrown, things falling apart, the hero risks everything. Vorhaus shows how the comic possibilities of a premise can be realized to the fullest by gradually and simultaneously raising the stakes of victory and escalating the jeopardy of failure.

BACK TO: Journalism & Broadcast
PREVIOUS TITLE NEXT TITLE