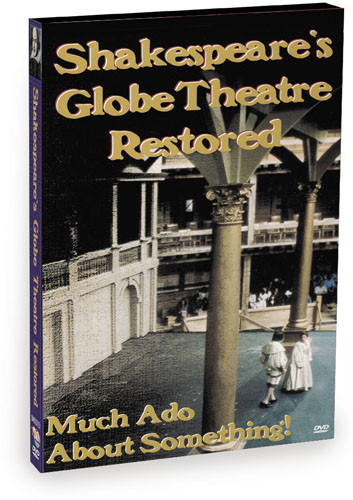 Celebrate Shakespeare's work in the original setting and open air acoustics for which he wrote his greatest plays. Witness this historically significant production of Much Ado About Nothing, the first recorded Elizabethan production on the newly rebuilt Globe stage in London. Shakespeare's Globe Theatre Restored video documents eighteen months of planning, rehearsal, location work, and post-production by the University of California at Berkeley Shakespeare Program, culminating in the performance of one of Shakespeare's greatest plays. Visit the fully operational restored Globe Theatre on the Bankside of the river Thames, near its original site and experience how the reconstructed Elizabethan Theatre provides a venue for teaching and studying Shakespeare's plays in the ultimate authentic performance setting.

OEwill be of interest to English literature and drama students at high school and college levels. Recommended.O - Library Journal. 3 Stars! OThis video excels as a teaching tool for students of Shakespeare and drama.O OAppropriately tinged with apprehension and excitement about the Bard on such hallowed ground.O - Video Librarian Magazine. OEadvanced dramatic arts classes may enjoy experiencing the planning, rehearsals, scenes from the play, and post-production discussions of the Berkeley Shakespeare Program students. O- Video Library Journal.