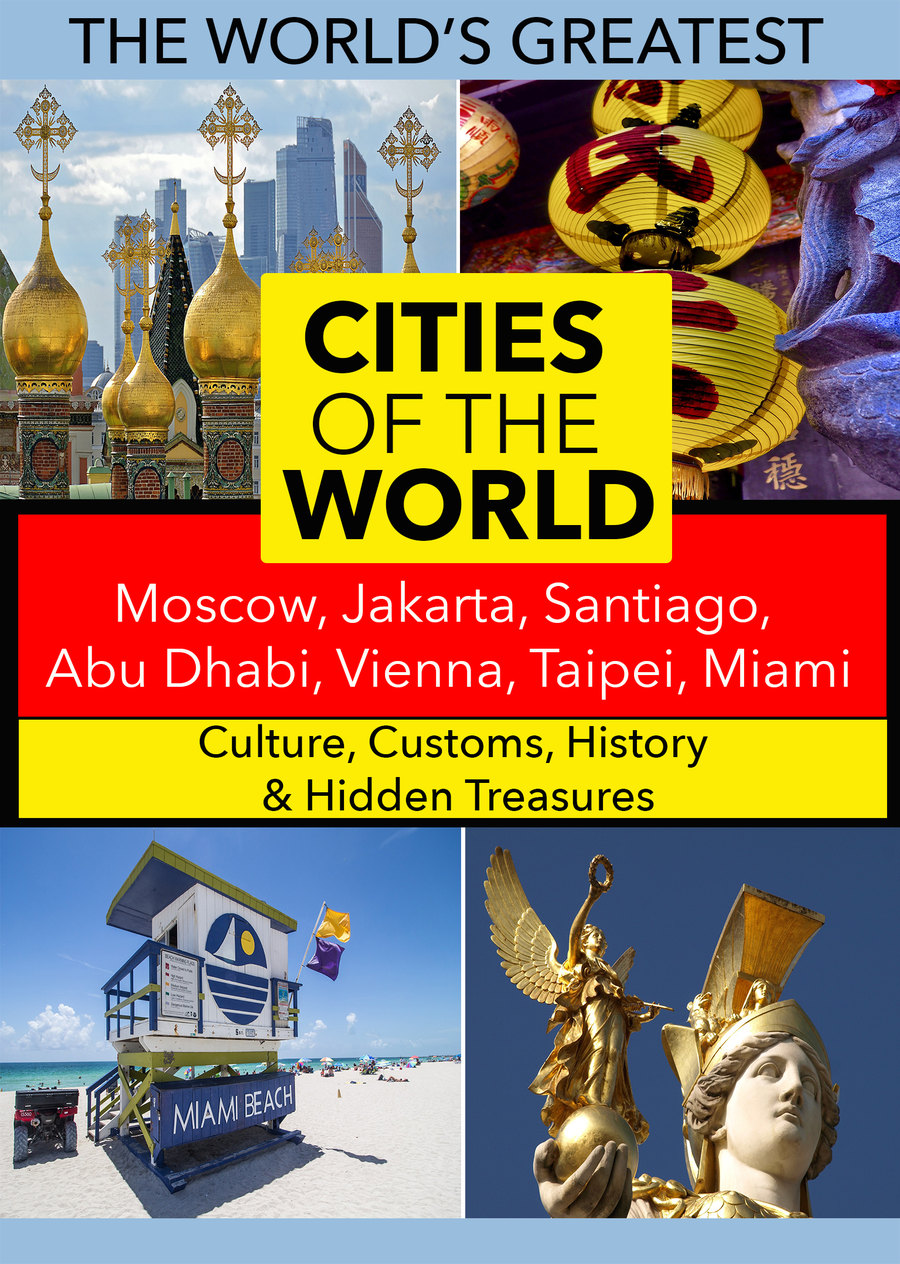 Featuring Moscow, Jakarta, Santiago, Abu Dhabi, Vienna, Taipei, Miami. present. It is known as the city that has inspired authors and poets, for being the center of the Soviet mystery during the Cold War. Moscow has over 10 million residents, consisting of mainly ethnic Russians. It has been heralded as one of the world's most expensive cities, being an international business center. Many global corporations have set up corporate branches in Moscow. The closer to the center you stay, the more expensive accommodations in Moscow will be. The Moscow Kremlin is located in the heart of the city, making it the seat of Russia's government. Tourists in Moscow today have the privilege of seeing the architecture, even back during the reign of Ivan the Terrible, such as St. Basil's Cathedral. These serve as signs of Russia's history, from how the tsars once ruled over it as the president does today. JAKARTA the huge, sprawling metropolis that's the capital of the Republic of Indonesia. It is home to about 9 million people. It is located on the northern coast of Java, and has expanded through the years, absorbing many villages in the process. Together with its many suburbs, Jakarta has become a megapolitan city. The city itself lies on a wide, flat delta, intersected by about 13 rivers. Popular is the Bay of Jakarta, with its large number of tiny islands, called Pulau Seribu or the Thousand Islands. It is a tourist resort for swimming and snorkeling. Nearby are also popular volcanoes Gede and Pangrango, with cool, majestic mountain resorts located around it. SANTIAGO Chile's capital center. The city offers tourists with a bevy of museums, theaters, restaurants and bars, as well as events and entertainment. Santiago de Chile is also located at the country's center, making it a convenient springboard for when you want to explore the rest of the country. Santiago is fast-growing, and has about 7 million inhabitants in its metropolis. The city is also great for wine-tasting. There are many remarkable winery and vineyards around Santiago. ABU DHABI capital city of the United Arab Emirates. It's an orderly, industrious city that's situated in a convenient waterside location. Abu Dhabi has definitely made itself a bustling center for government and business. Travelers have gone curious to see what else is in store in Abu Dhabi. Probably the most popular attraction is the Sheikh Zayed Grand Mosque, the place never disappoints. It is clad in Macedonian marble, in all its beautiful and mammoth landmark building. Around the city are districts of old, majestic buildings. One of the very famous ones is the Al-Hosn, the oldest building in Abu Dhabi. It is also called Old Fort or the White Fort. The palace was built in 1793 to serve as the home of the ruling family and the seat of government. One of the most recommended places is the Women's Craft Center Here you'll see women demonstrating their expert weaving, embroidery, and basketry skills. VIENNA has a lot to offer. There's the classical music scene, the historical site, its famous architecture, and its rich culture of theater and performances. Many also like its slow-paced city lifestyle and unique old city charm. Inside the old walls of Vienna is a place teeming with young energy, vibrant creativity, and experiences waiting to be explored. Vienna, in fact, is also known for its sweet desserts and cakes and many, many must-try delicacies. One of the popular Viennese dishes is the Eitrige -- which is a hot sausage with cheese that you'll find in many stands around the city. TAIPEI The capital city has about 7 million and is An exciting destination, head over to Taipei for its night markets. The local cuisine merges the best flavors from Mainland China, Japan, Beijing, and many others. And the night market is the place to try it, for an affordable price and a unique experience. The Taiwanese are actually fond of Karaokes, and they like to do so while sober. In Taipei, you can rent a room, buy drinks and food, to enhance your karaoke experience. The red light district is one place to try the karaoke, located in Wan-Hua district. MIAMI If you would hear that the city of Miami gets an average of 3,200 hours of sunshine, you'd probably head over to the city in an instant! The winters in Miami, in fact, are sunny, too. Because of this, Miami has become known as quite a cheery city. Aside from the endless sunshine, there are many other reasons to explore the city. First are the beaches. The popular ones are the North Shore Park Beach, Crandon Park Beach, Golden Beach and South Beach. Most beaches are equipped with the best developed facilities for you to be able to try the water sports. Then there are also the everglades, or the tropical wetlands just right outside Miami. Miami is also quite an artistic city. It has become an excellent destination for esteemed artists and art galleries from all over the country. It's also notable how Miami's museums and art galleries aren't the usual stuffy and intimidating types.

BACK TO: Travel, Lifestyle
PREVIOUS TITLE NEXT TITLE