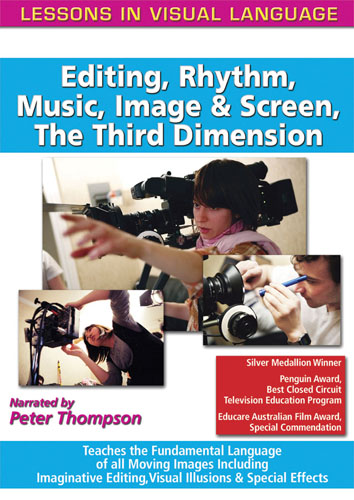 Order The Series on DVD and Save $440! This award-winning series, devised and narrated by Peter Thompson, deals with the fundamental language of all moving images. Thompson opens our eyes to the basics of vision that we all take for granted. Imaginative editing, visual illusions and special effects constantly lead the viewer to redefine the meaning of the presented image. Each program is crammed with dramatic examples and startling concepts guaranteed to stimulate creativity and provoke discussion. Silver Medallion, Television Society of Australia, Penguin Award for Best Closed Circuit Television Education Program, Educare Australian Film Awards, Special Commendation. This DVD covers Editing, Rhythm, Music, Image & Screen & Third Dimension. Editing: This program explores the ways in which editing can be used to reconstruct, rearrange or fragment physical space & sequences of events. This program uses a hallucinatory psychological drama involving an estranged couple, a child and a fiery auto wreck to show how editing is used to compress time, create imaginary spaces and pull the viewer through successive layers of dream and reality. Rhythm: This program begins by exploring the wealth of natural and mechanical rhythms in the world around us. Thompson shows that rhythm in film or video can be achieved by editing, by movement within the frame independent of editing or by the use of sound. He shows how these strategies can be combined in imaginative ways. Music: This program explores the wide-ranging forms and functions of music for the screen. A series of compelling dramatized scenes highlight the evocative and emotive power of music, as composer Bruce Smeaton discusses the structure and purpose of the score he has created for each scene. Image & Screen: Discover the sensory qualities of the filmed image, including luminosity, definition and grain. Thompson shows how it is possible to manipulate exposure, depth of field and other factors to enhance or undermine an illusion of reality. The Third Dimension: Our eyes and brains use a variety of visual cues to construct three dimensional space. Thompson shows how we can use these cues to define special relationships or to fool the eye. This program includes a number of startling optical illusions.

BACK TO: Cinematography
PREVIOUS TITLE NEXT TITLE