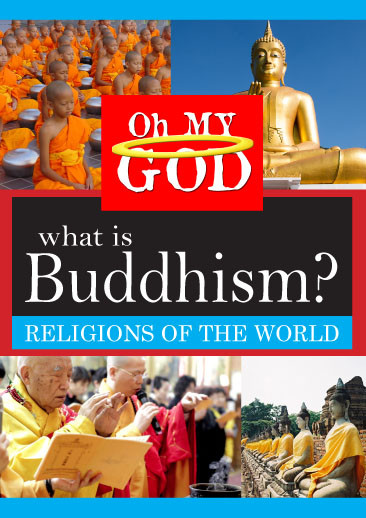 With more than 300 million followers worldwide, Buddhists follow a path towards enlightenment in what is as much a religion, as it is a way of life. A Buddhist Monk attempts to quieten host Tevya's mind, but first - a celebration. It's Buddha's birthday and Tevya is in for a food-fight while meeting "The Hungry Ghosts".

3 Stars. Recommended. - Video Librarian. Part of the series Oh My God-which explores the belief systems of the world's major religions-What Is Buddhism? is a lighthearted introduction to Buddhist practices. Host Tevya Heller serves as jovial guide, presenting himself as the newbie outsider in a head-on collision with the unique tenets and rituals of various faiths. Accompanied by a young temple leader, Heller is introduced to a female monk who is the master of a U.S.- based congregation. Heller presents a mix of wondrous attitude and self-deprecating jokes to the master as he learns that monks are cut off from their families (for the most part) from a tender age, the better to focus on everyone in a community. Heller also discovers why monks shave their heads, but soon delves into matters of greater consequence, such as the proper techniques of meditation and chanting. Heller also talks to a group of teen Buddhists, who encourage him to breathe and be calm, and he gets into the spirit of things during a madcap "money grab" and "food grab" that disperses coins and edibles left for dead souls who have not yet been reincarnated. Viewers will witness how one community puts their faith into practice.