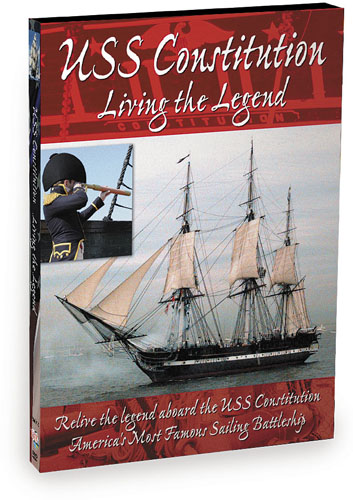 On July 21st, 1997, the U.S.S. Constitution celebrated her 200th birthday and set sail for the first time in over a century. At her helm, on the lines and aloft is another generation of young men and women becoming leaders in today's Navy. America has few symbols as enduring as "Old Ironsides." A technical marvel of her time, Constitution gave our young republic its first victories at sea and began a tradition of excellence for the U.S. Navy. Now restored to her original splendor by skilled craftspeople and children across the nation who contributed pennies for her new sails, Constitution reaffirms America's dreams as her crew sails into the twenty-first century. Relive the legend and watch this famous ship "Constitution" that gave our young republic its first victories at Sea. The Constitution--called "Old Ironsides" because cannonballs could not penetrate her tough oak sides--was one of the first of the original six frigates that made up the U.S. Navy. A 44-gun frigate built at the Edmond Hartt Shipyard, Boston, MA, in 1797. The ship carried a crew of more than 450 and served in the undeclared naval war with France (1798-1800,) Was the Flagship in the Mediterranean squadron and in the Tripolitan War (1801-05). In the War of 1812 the Constitution won battles with the British frigates Guerriere and Java. The Constitution made its last combat tour in 1814-15. The ship was scheduled to be scrapped in 1830, but Oliver Wendell Holmes's poem "Old Ironsides" inspired a public movement to save it. Restored in 1925, the Constitution is now The oldest commissioned vessel in the US Navy.