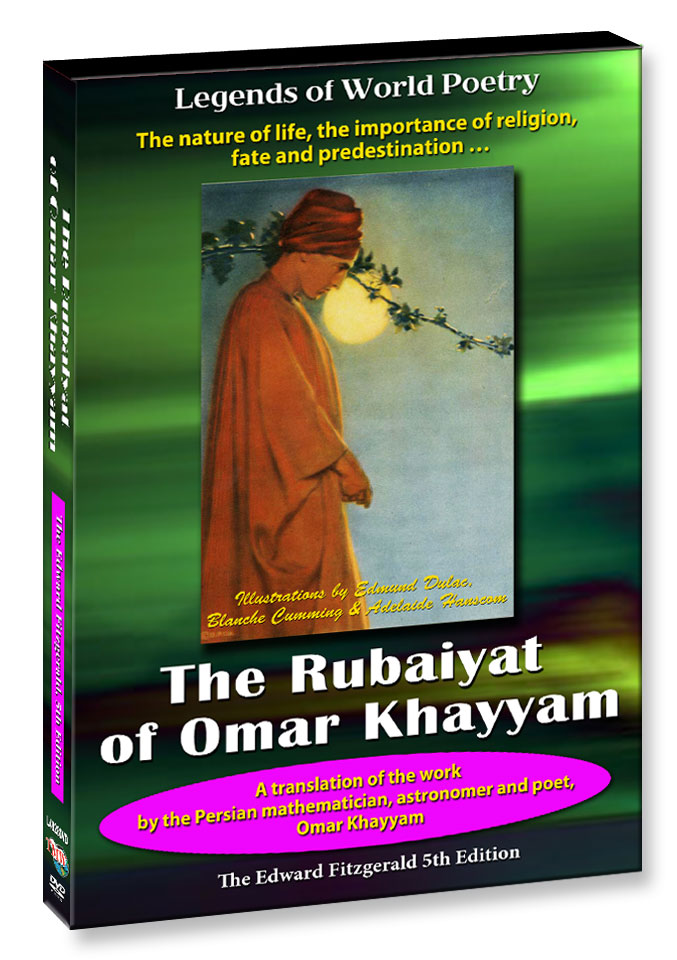 X
Please note you'll have 44 minutes of viewing time for this title, during the 24 hour period after your purchase.

A translation of the work of the Persian mathematician, astronomer, and poet, Omar Khayyam (1048 - 1131). Translated and popularized by the English scholar Edward Fitzgerald in 1859, this poem is one of the most influential to come out of the 19th Century. Edward Fitzgerald's translation of the Rubaiyat of Omar Khayyam, is a mystical, highly symbolic poem that deals with man's relation to God, the nature of the divine, the fleeting nature of life, and a host of other issues important to the contemplative mind. The poem, by the Persian poet, astronomer and mathematician Omar Khayyam, is a distillation and translation of the over 1000 quatrains originally rendered in Farsi. In this program, the haunting, melancholy musings of the Persian philosopher-poet are brought to life in vivid detail by voice artist Bob McGraw.Accompanied by color illustrations by Edmund Dulac and the Artist-photographer team of Blanche Cumming and Adelaide Hanscom, together with haunting melodies inspired by the cultures of the Arabian peninsula, this program brings the classic poem into vivid focus. The Rubaiyat of Omar Khayyam - The term rubaiyat is the plural of the Farsi word for quatrain (a four line stanza). Fitzgerald's translation consists of 101 quatrains and was first published in the West in 1859. It is actually a distillation of over 1000 quatrains in the original rendering rendered in such a manner as to be more thematically consistent (it was a common practice with this type of poetry to rearrange the quatrains to suit a particular rendering). In this poem, the author deals with a variety of philosophical issues and perspectives about the nature of life, the importance of religion, fate and predestination along with a host of other interrelated issues. Known for its lyrical beauty and well-crafted rhyme and meter, the Rubaiyat has been one of the most popular poems to come out of the 19th century. The Study Guide -The accompanying (online) study guide shows how the themes used in the poem symbolically represent a variety of issues and problems that are of importance to anyone who has ever considered the meaning of existence. Life and death, heaven and hell, predestination vs. free-will are all represented in the poem. Reason and its limits vs. hedonism together with the fleeting nature of existence are also considered. Includes questions for further study, vocabulary, together with an explication of selected quatrains as they relate to the major themes of the poem. Who Were Omar Khayyam (1048 - 1131) and Edward Fitzgerald (1819 - 1883): Omar Khayyam was a Persian mathematician, astronomer and poet who was born in the city of Naishapur (located about 250 miles from present day Iran). He lived under the Baghdad Caliphate between 1048 CE and 1131 CE and was one of the best known mathematicians and astronomers of the day. He assisted in the reform of the Persian Calendar in 1074, and spent time researching Euclid's Fifth Postulate (Research into the so-called Famous Fifth Postulate of Euclid eventually led to the development of Einstein's Theory of Relativity). Edward Fitzgerald (1819 - 1883) was an English Poet and scholar who specialized in Oriental languages. He was also known for his translations of Agamamnon, Oedipus, and Calderon. Bonus: Features Captioned text of the poem displayed on the screen as the narration proceeds.