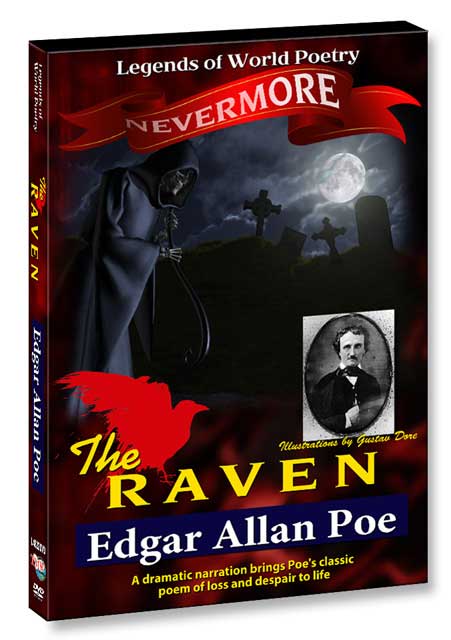 America's Great Literary Legend - The most famous poem in American Literature. Illustrated by Gustav Dore. Edgar Allan Poe remains one of America's great literary legends and in this dramatic program voice artist Bob McGraw brings Poe's classic poem of loss and despair "The Raven" to life using a haunting voice and the famous illustrations of Gustav Dore to tell this tragic story. "The Raven" - The 1845 publication of "The Raven" made Poe widely popular in his lifetime and remains one of the most famous poems ever written. It is noted for its musicality and supernatural atmosphere and tells of a talking raven's mysterious visit to a distraught narrator, lamenting the loss of his love and tracing a slow descent into madness with its constant repetition of the word "Nevermore". The Study Guide - The accompanying (online) study guide shows how the themes used in the poem were relevant to the meaning of life during the early 19th century. You'll see how all writers, both amateur and professional; use their own life experiences, as reflected in the text of "The Raven" and how the themes exhibited in this poem are still relevant today. Who was Edgar Allan Poe? (1809 -1849) - An American author, poet, editor and literary critic, considered by many to be part of the American Romantic Movement. Poe was one of the earliest American practitioners of the short story and is widely acknowledged as the inventor of the modern detective story and an innovator in the science fiction genre, but he made his living as America's first great literary critic and theoretician. Poe's reputation today rests primarily on his tales of terror as well as his haunting lyric poetry. Bonus: Features "Captioned text" of the poem displayed on the screen alongside the narration.

Teachers looking for a dramatic reading of Edgar Allen Poe's classic, "The Raven," will appreciate this production read by voice artist Bob McGraw. His memorable narration will draw students in as he emphasizes rhythmic words such as "rapping," "tapping," and "napping." As the poem is read, the text is shown onscreen, helping to engage visual learners. Black-and-white lithographs created by 19th-century artist Gustav Dore illustrate the poem as it is read to help viewers better understand the meaning of Poe's work. Along with the narration and images, surreal music plays in the background, adding to the haunting flavor. Students often have a hard time reading and interpreting this poem, and this production will help teachers engage learners. Created as a slideshow, it can be paused at any time to discuss the images and sections of the poem. The online teacher's guide includes learning objectives, discussion questions, 25 questions for thought and further discussion, and the text of the poem.-Karen Alexander, Lake Fenton High School, Linden, MI