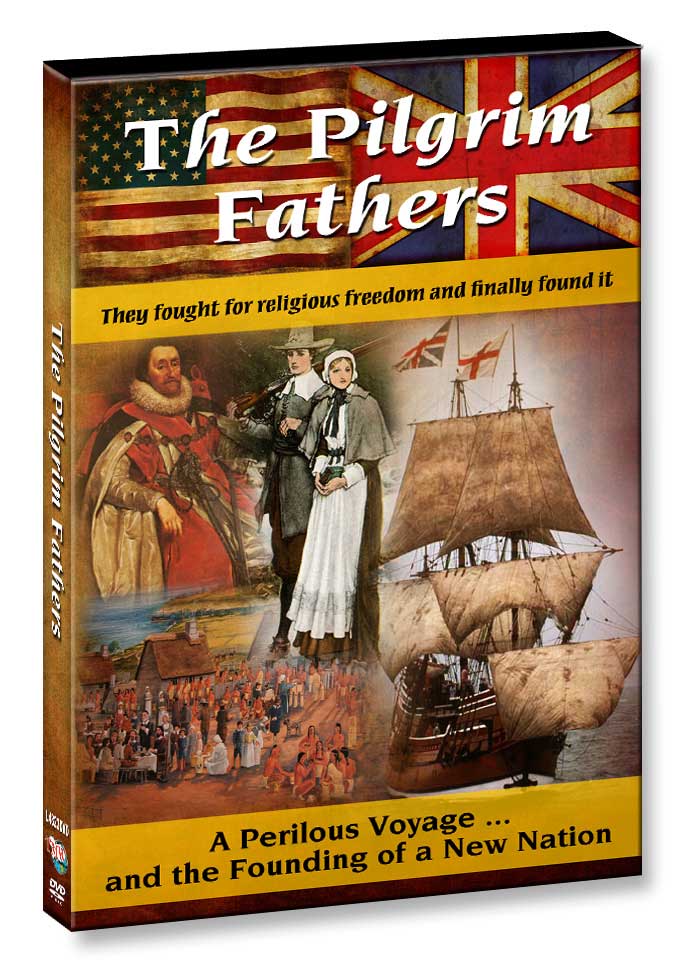 From the Old World to the New - the Quest for Religious Freedom . In 1620 one hundred Puritans boarded the 'Mayflower' bound for the New World. These people were The Pilgrim Fathers ....... This is the story of a group of religious Separatists who sailed across the Atlantic in 1620 and helped shape the laws and ways of life in what was to become the United States of America. Told by two British historians from near the Pilgrims home villages in Nottinghamshire, England and interspersed with dramatic reconstructions this program probes their roots in the England of the 1600's. It explores their reasons for leaving England as well as the perilous journey they took to get to America. The story begins in Nottinghamshire where Separatists - worshippers wanting to reform the then highly intolerant church - were in danger from the Crown. They believed in a greater freedom of religion than the authorities would permit. Fearing for their lives they decided to leave England and create a community where they were free to practice their beliefs. After a failed attempt at the dangerous journey they managed to escape to Amsterdam where they spent twelve long years before their decision to move to the New World. The program reenacts not only the Pilgrims' religious services but the perilous journey by just over a hundred men, women, and children in the Mayflower and another leaky vessel, one of which had to be abandoned, over months at sea through storms and terrible conditions. On November 9th 1620, land was spotted - Cape Cod on the East coast of North America - over 3,000 miles from the start of their journey in Nottinghamshire. The Pilgrims found a rich land with cornfields, timber and rivers teeming with fish. They set up their new colony - Plimoth - now modern Plymouth, Massachusetts. From these humble beginnings their influence helped shape the nation into the United States of America that we know today. Although we credit the Pilgrims for Thanksgiving, this program explains why this brave group is far more significant, because the quest for religious freedom matters far more than a celebratory harvest feast. The tale ends with the historic Mayflower Compact, the first self-governing agreement in America.

3 1/2 Stars. Highly recommended. This highly informative documentary traces the history behind the Mayflower's voyage to the New World in 1620, which brought Puritan exiles from England to America. The Pilgrim Fathers interweaves animated illustrations and dramatic re-enactments with comments by historians to tell the story, which begins in the late 16th century amidst the plague in England and an unbearable rise in persecution against separatists by an intolerant Church of England. Years of secret meetings run by defrocked preachers led to a decision by some Puritans to leave England and settle near Amsterdam. Despite experiencing considerable culture shock, the community stayed for 12 years before determining that their destiny was in the New World. The film details the many hardships during the Mayflower's crossing from Devon, England, and also looks at the concerns the Pilgrims must have felt upon seeing the barren landscape of Plymouth, near what is now Cape Cod. The Pilgrim settlement was not the first in the future America, but the sacrifices made by the survivors, coupled with the drafting of the Mayflower Compact-a governing document embracing the concept of majority rule-are among the reasons we continue to revere the Pilgrims today. DVD extras include an online teacher's guide. Highly recommended. - Video Library Journal / The religious beliefs and experiences of the Puritans who parted with the Church of England in the 1600s in order to worship at they pleased are explored. Their journey was spiritual as well as geographical. Leaving England, they traveled to Amsterdam where they lived for 12 years before sailing to the New World to create a colony. Facing tremendous struggles and sacrifices along the way, they landed in November 1620. They found a rich land and worked to plant crops, survive the weather, and prosper. Eventually other settlers followed them to New England and a thriving Massachusetts Bay Colony resulted. The Pilgrims, with their Mayflower Compact and staunch religious beliefs tied to government, laid the foundation for the United States and its current constitution. Two British historians, Sue Allen and Russell Hocking, do an outstanding job of telling this story. On-site locations in Nottinghamshire, England, illustrations, and dramatic re-creations enhance the production. The teacher's guide is extremely helpful with a program overview, questions for thought and discussion, information about geographic locations, and key terms. There is a great deal of information about English church history, so it would be helpful to have students do some background reading prior to viewing. Divided into class-friendly sections, the program can be utilized in literature and history classes, especially advanced placement sections.- School Library Journal