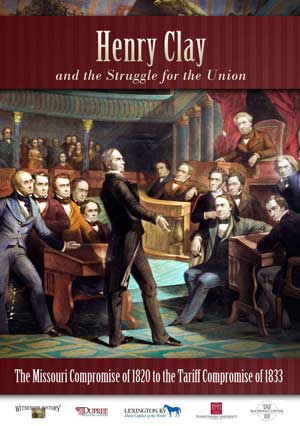 Henry Clay and the Struggle for the Union explores the turbulent forty years leading up to the Civil War; it is the first documentary ever produced on Henry Clay of Kentucky, the most dominant public figure in the formulation of compromises in 1820, 1833 and 1850 that narrowly avoided disunion and civil war. This program examines the impact of slavery on the expansion of the Nation westward and how conflict between North and South, free States and slave States, was, in the end, irrepressible. Lavishly illustrated with stunning period photographs and art, footage of the Old Senate Chamber in the Nation's Capitol, dramatic scenes of Clay and his senate colleagues played by skilled professional actors and enhanced by brilliant maps, Henry Clay and the Struggle for the Union brings the history of the years before the Civil War alive on the screen. Students Will Learn: What event triggered the need for compromise in 1819? What other event in 1820 saved the nation from splitting apart? What was the final compromise of 1820?After a compromise was reached admitting Missouri and Maine as States, what caused a second crisis over Missouri's admission to the Union? What act of Henry Clay's nearly ruined his political career? What events triggered the need for compromise in 1833?What kept South Carolina from seceding and plunging the Nation into civil war?

3 1/2 Star review. Highly recommended. This second installment in a series about Henry Clay-the 19th-century Kentucky senator, secretary of state, three-time-presidential candidate, and political idol of a young Abraham Lincoln-underscores Clay's essential role in keeping the United States from falling into civil war earlier through his formulation of the 1820 Missouri Compromise and the 1833 Tariff Compromise. Fast-paced and brief, the documentary deftly portrays the rising tensions between North and South over the nation's westward expansion. Supplemented by period photographs and art, dramatic re-enactments, maps, and footage of the Old Senate Chamber in the U.S. Capitol, writer-host Kent Masterson Brown presents a synopsis of the ?rst crisis, centered on Missouri's application to join the Union as a slave-owning state, which would throw congressional control to the South. Clay was deeply in?uential in forging a complicated agreement in 1820 that no one liked but still kept the country together. In 1833, South Carolina refused to collect federal tariffs on imported goods, prompting President Andrew Jackson to threaten the state with charges of treason. Again, Clay (who vigorously supported tariffs as a means to develop America's economic infrastructure) had a major hand in ?nding a solution. Other topics touched on include Clay's political ambitions and his work with other senators-especially Daniel Webster and John C. Calhoun-in trying to keep the Union together. The other titles in the Henry Clay and the Struggle for the Union series are: The Formation of the Union and its Early Challenges and The Compromise of 1850 to the Civil War. - Library Video Journal. Star Review. Henry Clay served in the House of Representatives and the United States Senate and worked to preserve the Union against the destructive forces of the slavery issue. The narration emphasizes the key events between 1820 and 1860 that led the nation to war. Using dramatic re-creations, historical documents, maps, period photographs and art, and stirring background music, the well-edited series brings the years before the Civil War to life. The seeds of the Civil War were planted at the time of the American Revolution and the writing of the Constitution. An industrial North surpassed the agricultural South in wealth and population. Westward expansion, first into the territories of the Louisiana Purchase, and later into land taken from Mexico in 1848, compounded the issues and forced the country to decide if slavery would spread to these new areas. Clay, the Great Compromiser, offered three compromises-the Missouri Compromise of 1820, the Tariff Compromise of 1833, and the Compromise of 1859-that addressed these issues and forestalled the Civil War for 40 years. Well-produced, fact-filled, and classroom-friendly, these programs should be a part of all library collections, especially during this sesquicentennial of the Civil War.-Patricia Ann Owens, Illinois Eastern Community Colleges, Mt. Carmel. Kentucky politician, orator, and lawyer Henry Clay was known as the "great compromiser." Sampled from a three-part series ($69.95 each) that "explores the turbulent 40 years leading up to the Civil War," The Missouri Compromise of 1820 to the Tariff Compromise of 1833 examines Clay's role in the featured compromises, which helped delay the Civil War. Containing voice-over narration, readings, vintage photographs, artwork, historic documents, maps, and dramatic reenactments, this concise program presents historic details in an accessible and visually appealing manner. This segment does not cover the personal history of Clay, who often compromised his own interests to save the nation, but it does touch upon questionable actions in the election of 1824 and the Tariff Compromise of 1833. The remaining titles, The Formation of the Union and Its Early Challenges and The Compromise of 1850 to the Civil War, round out this fine series. - Debra McLeod, Booklist