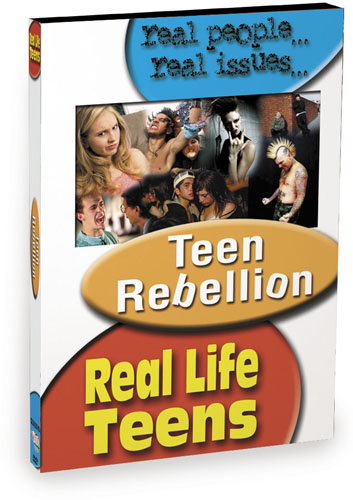 X
Please note you'll have 34 minutes of viewing time for this title, during the 24 hour period after your purchase.

Real Life Teens is an unbiased and realistic look from the perspective of teens, at the wide variety of issues teens face today featuring young teenagers telling their real stories, in their own words. The series discusses significant issues in adolescent society and cuts through many barriers with its honest and relevant advice and information. Teenage rebellion is a normal part of adolescence. One of the major developmental tasks teens face is developing independence from their parents and becoming their "own person". Transitioning from a dependent child to an independent adult not only takes time but also manifests itself in behavior patterns such as rebellion, defiance and ambivalence. Rebellion takes many forms, positive and negative and teens learn that the decisions they make for themselves have consequences. Teens will develop their own personal beliefs which will inevitably lead to some bad choices and mistakes. In this episode of Real Life Teens teens not only talk about their own experiences with rebellion, but also discuss their attitudes to rebellion, their parents, school, society and their peers. Includes pointers by clinical psychologist Dr Deborah Cooper, Phd. Dr Deborah Cooper is internationally known and a highly respected expert on relationships and personal growth. Dr. Cooper is a State License Marriage Family Child Counselor (MFCC) and holds a State Teaching Credential - Psychology and Hypnosis.