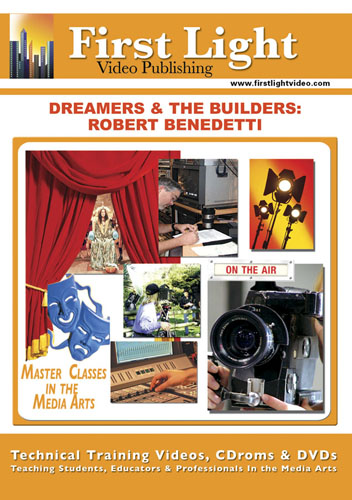 X
Please note you'll have 1 hour, 38 minutes of viewing time for this title, during the 24 hour period after your purchase.

Producing For The Theater Dreamers And The Builders with Robert Benedetti

Producing for the Theater - Dreamers and the Builders Series. The theatre is a world of Omake believeO that can challenge, entertain, amuse and inform an audience. Capturing the hearts and minds of the audience is the role of the creative people who write, stage design, direct and perform. This series examines the jobs of the creative people behind theater productions and considers their processes. It explores the various aspects of the work of actors, directors, playwrights, designers, and technicians and discusses the ways in which they work individually and collaborate. These four programs take you behind the OcurtainO to introduce you to those who take theatre from Othe page to the stage.O A unique amalgam of Odreamers and doers.O Award winning scenic designer John Lacovelli explains how a playOs visual experience enhances the emotional impact of the production. Tony winning singer/actor Robert Goulet, who has starred in many musicals and straight plays on Broadway, and all media, reveals a compelling view of the difference of working in musicals as opposed to straight plays. YouOll also hear from playwrights, directors and theatre critics including Tony Del Valle, Robert Benedetti and Glen Cassale as they discuss the Oextension of the fourth wallO and the collaborative effort that produces a play in the theatre.