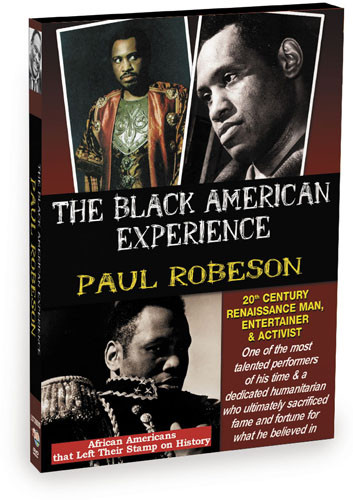 20TH CENTURY RENAISSANCE MAN, ENTERTAINER & ACTIVIST. PAUL ROBESON was a celebrated African-American Actor, Athlete, Singer, Writer, and Civil Rights Activist. Robeson's many achievements are chronicled in this program, ranging from playing with the NFL to graduating from Columbia Law School, performing on Broadway and in Hollywood films to founding the American Crusade against Lynching as well as Council on African Affairs. Robeson was one of the most talented performers of his time and a dedicated humanitarian who ultimately sacrificed fame and fortune for what he believed in. His association with Leftist Politics during the era of the Cold War, and frequent denouncing of American political parties led to his eventual blacklisting with other prominent writers and artists during the McCarthy Era. His talents in all areas are remarkable, and his dedication to attaining a peaceful coexistence between all the people of the world is truly admirable. Bonus Material: Each program includes 24 minutes of Bonus material.

One of the most talented performers of his time & a dedicated humanitarian who ultimately sacrificed fame and fortune for what he believed in.