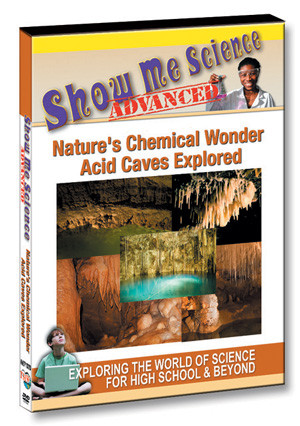 X
Please note you'll have 32 minutes of viewing time for this title, during the 24 hour period after your purchase.

Deep in Southern Mexico's jungle, the Villa Luz limestone caves support an ecosystem that thrives in a highly poisonous, acidic environment. This rare type of cave is found in few spots on Earth. The Villa Luz, is known for the bacteria in its thermal sulphur springs that produce hydrogen sulfide gas. When the gases form bonds with oxygen, the result is sulfuric acid. The acid eats away at the cave walls, constantly altering the patterns in the cretaceous limestone. All life forms, from microbial colonies to spiders, fish and bats, are interdependent upon the toxic soup of water, sulphur-oxide and hydrogen monoxide for survival. Surprisingly, the caves are home to spiders, bats, and a unique fish species referred to as the Cave Molly. The caves are also well known for their snottites, which are mucous-like formations that resemble stalactites. Descending into the caves is very dangerous as there are potentially lethal levels of hydrogen sulfide gas. Researchers carefully plan expeditions into the caves to better understand these rare ecosystems and must wear respirators and protective clothing as they enter the cave system in their attempt to document and understand the deadly ecosystem.