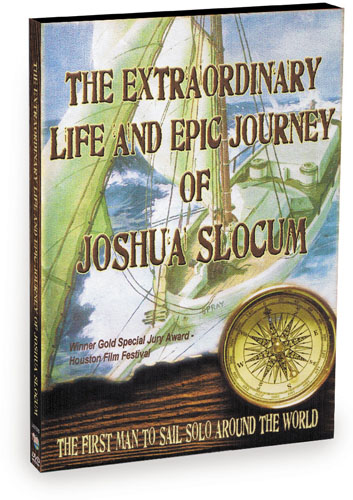 The career of Joshua Slocum, one of the19th Century's most successful sea captains collapsed with the end of the Age of Sail...until he was given a 100 year old rotting oyster boat and decided to use it to become the first person ever to sail around the world - alone. His colorful life and remarkable voyage are captured for the first time in this film, winner of the Gold Special Jury Award at the Houston Film Festival. This documentary fleshes out this independant yankee sailor, following his life from his birth in Nova Scotia - to his ultimate mysterious disappearance post-circumnavigation in 1909. The film is beautifully shot and artfully narrated, depicting Slocum's life as a runaway teen, a sea captain in the days of square riggers, an outrunner of pirates, outsmarter of natives, and the original "roughin' it" type travel writer. Following his history and his loving re-creation of the "Spray", the wooden sloop that he salvaged from an abandoned derelict oysterboat to become the lovely sturdy vessel in which he was first to round the globe. Like Slocum's wry informative novel, this program film delights and inspires, as he interviews sailors and historians alike. Leaves a taste of salt in your mouth - not only causing you to yearn for the sea, but perhaps also to shed a tear in appreciation of Slocum's ardor and the changing times through which he lived."