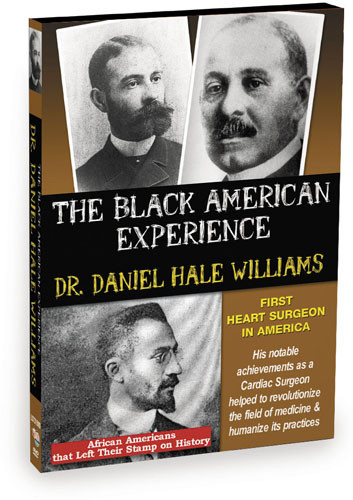 FIRST BLACK HEART SURGEON IN AMERICA. DANIEL HALE WILLIAMS was an African-American cardiologist that performed the first successful open heart surgery. He also founded Provident Hospital, the first non-segregated hospital in the U.S. Dr. Williams was an extraordinary man of incredible talent and merit and his exceptional accomplishments are documented with great care in this inspiring program. Born to 'freed people of color' in 1856, he attended medical school at what is now Northwestern University in Chicago to become a practicing surgeon. His observations that American Blacks were treated as second-class citizens within the medical community, both professionally and as patients, motivated him to establish and run the first hospital for Blacks in the United States; Provident Hospital. Williams set up the first nursing school for Blacks and performed one of the first open heart surgeries in the world. His encounters with institutionalized racism gave him the courage and determination to create more hospitals and educational programs like the one he had at Provident. In 1885 he co-founded the National Medical Association for Black Doctors and openly encouraged African Americans to support hospitals that would offer first-rate care to African-Americans. In 1913, he became a charter member and only African American in the American College of Surgeons. Dr. Daniel Hale Williams' notable achievements as a Cardiac Surgeon helped to revolutionize the field of medicine and humanize its practices. Bonus Material: Each program includes 24 minutes of Bonus material.