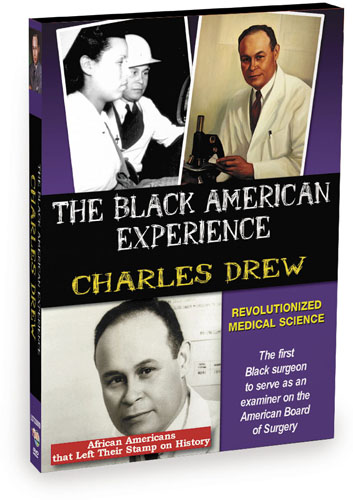 X
Please note you'll have 58 minutes of viewing time for this title, during the 24 hour period after your purchase.

REVOLUTIONIZED MEDIAL SCIENCE. CHARLES DREW born 1904, was an African American physician and medical researcher who revolutionized the field of medicine with developments in blood-work. Growing up in Washington, D.C., Drew excelled in everything he approached but his life and career ambitions always faced an upward battle due to the color of his skin. His research on plasma and transfusions in the 1930Os led to discoveries relating to the separation and preservation of blood and the establishment of the world famous American Red Cross. Drew was the first doctor to work for the ARC and oversaw the first blood drive, OBlood for BritainO, which supplied blood plasma to the British fighting in World War II, saving thousands of allied lives. He protested against the prevalent practice of racial segregation in the donation of blood from donors of different races on the basis that it lacked scientific foundation. Charles Drew set a standard of excellence unparalleled by most of his white contemporaries. In 1943, his distinction in his profession was recognized when he became the first Black surgeon to serve as an examiner on the American Board of Surgery. Despite the prejudices of American society in the first half of the 20th century, Charles Drew persevered in his practice and was never afraid to stand up for his beliefs and racial equality. Bonus Material: Each program includes 24 minutes of Bonus material.

The first Black surgeon to serve as an examiner on the American Board of Surgery.