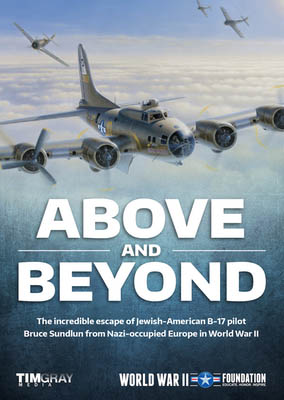 The Incredible Escape of Jewish-American B-17 Pilot Bruce Sundlun from Nazi-Occupied Europe in World War II. During overseas active duty beginning in June 1943 Bruce Sundlun, a Jewish-American college student, served as a B-17 Flying Fortress pilot in the England-based 384th Bomb Group of the Eighth Air Force at Grafton-Underwood Air Base. Sundlun's plane, the Damn Yankee, was shot down over Nazi-occupied Jabbeke, Belgium on 1 December 1943 after being damaged by flak and attacked by German fighter planes following the bombing of Solingen, Germany, on the "Yankee's" 13th mission over Europe. Five of his crew were killed, four others captured by the Germans. Above and Beyond is Bruce Sundlun's amazing escape from occupied Europe in World War II, filmed on location in Belgium and narrated by Sundlun's own daughter, Kara, who travelled back to the village of Jabbeke in Belgium, to re-trace her father's footsteps in World War II.