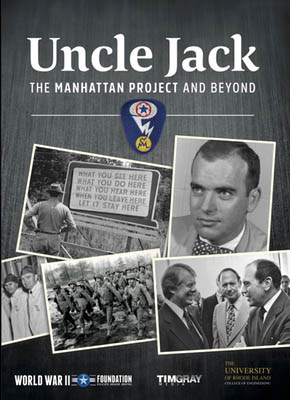 Uncle Jack The Manhattan Project and Beyond

The Manhattan Project in World War II was an enormous undertaking that required the efforts of many of the worldOs most brilliant scientists. Thousands of physicists, mathematicians and engineers were needed to design, build and test the worldOs first atomic weapon. The United States government did everything in its power to attract these individuals to the top-secret program. For me it was personal: One of those assigned to the project was my uncle, John Edmund Gray. I called him Uncle Jack. The eventual goal of the Manhattan Project was to find a way to end World War II, a conflict in which an estimated 60 million people were killed during the years 1939-1945. My Uncle Jack was one of those the American government relied on, not for his ability to fire a rifle, rather for his brainpower. After the war, John Gray went on to serve American presidents and become one of the leading advocates in the world for the use of atomic energy for peaceful purposes. Along the way, he became a close colleague of famed Admiral Hyman Rickover, the father of AmericaOs Nuclear Navy. Ironically, my Uncle JackOs work in the atomic field included consulting with the Japanese as they rebuilt their post-war society. John Gray was regarded as a pioneer in the field of nuclear energy and was front and center as the evolution of that power from wartime use to peaceful means came to fruition. My Uncle JackOs account is just one of 16.1 million American stories that had its roots in World War II.