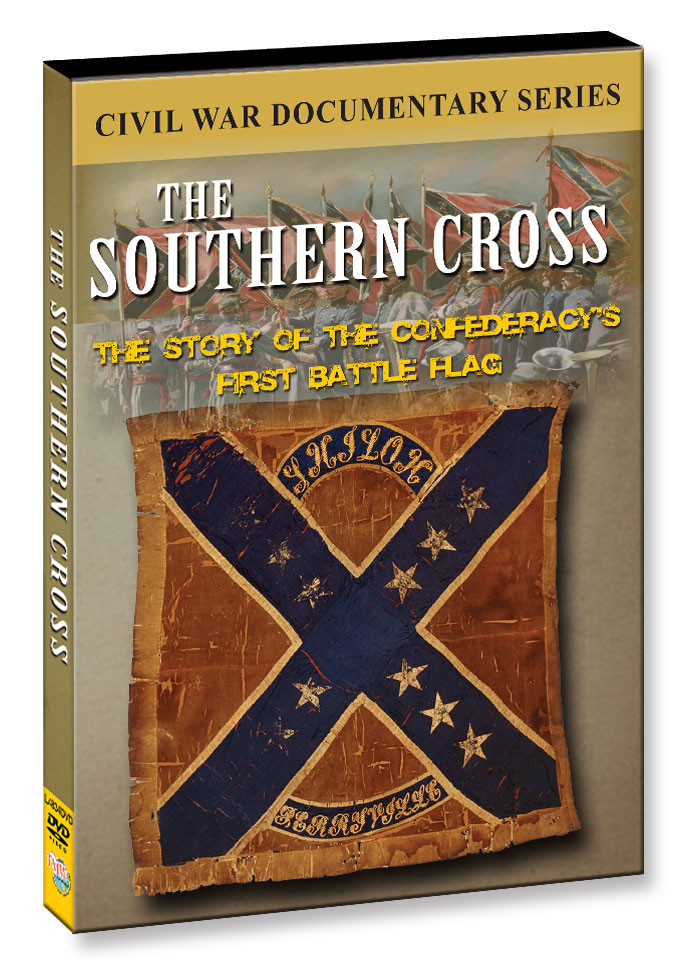 The Southern Cross The Story of the Confederacy's First Battleflag

This production chronicles the history of the design and creation of a flag that became the prototype for all of the St. Andrews Cross battle flags carried by Confederate armed forces. The hand-stitched silk flag with gold painted stars was borne by the Fifth Company of the Washington Artillery of New Orleans through the Battles of Shiloh and Perryville. The story of the flag?s creation will surprise and delight audiences everywhere. The flag was designed and made for the army after the first battle of Manassas as a military necessity and wholly without the authority or even the knowledge of the Confederate government. Mary Henry Lyon Jones of Richmond, Virginia stitched the flag together. After Generals P.G.T. Beauregard and Joseph E. Johnston approved Ms. Jones?s flag, sewing circles of more than four hundred women in Richmond sewed 120 flags made from Ms. Jones?s original design. Features a collection of photographic images of the officers and men of the Fifth Company. Action scenes were filmed at Waveland Historic Site in Lexington, Kentucky depicting Mary Henry Lyon Jones being given the design for the flag and stitching the prototype along with the Richmond sewing circles stitching the 120 battle flags to be given to the army in November 1861.

Born as a symbol of rebellion, the Confederate battle flag retains much of that symbolism to this very day. What is even more intriguing is the fact that the very commissioning of the original Confederate battle flag was itself, an act of rebellion. This little-known part of the flags story is told in a fascinating new documentary written and produced by historian Kent Masterson Brown. The Southern Cross ? The Story of the Confederacys First Battle Flag, chronicles the birth and creation of the Confederate Battle flag. Brown himself narrates the documentary and the film opens with Brown giving a brief history of the first secession flags and some background on what motivated the various designs, as well as who was responsible for those designs. Brown then discusses the efforts of South Carolina Congressman William Porcher Miles to have the Southern Cross?or the Cross of St. Andrews?the ?Saltire? (the diagonal cross X) used in the basic design for the Confederacy?s official flag. Miles was a member of the Confederacys provisional Congress and he objected to the design of the South?s original flag, the Stars & Bars. He was not the only one. Many Southerners thought the flag looked too much like the Union flag. But Miless objections went deeper. Brown points out that Miles was chairman of the flag committee and held the opinion that the federal flag was, ?the emblem of a tyrannical government.? Brown shares some interesting historical background about the Saltire, including the fact that it was ?the oldest emblem of sovereignty in the western world? and that the Romans used the symbol as a boundary emblem in Britain?even years before the Scots began using it in 832 A.D. The film also discusses some background in regards to the practical motivation for the flag?s design. There were numerous reports of confusion and mistaken identity on the battlefield; not only between the Union flag and the Confederacys first battle flag?the Stars and Bars?but also between the various regimental and state flags being flown. As Brown notes, The need for a common battle flag for Confederate combat units became apparent and one that was ?different from the Stars and Bars. - The Washington Times