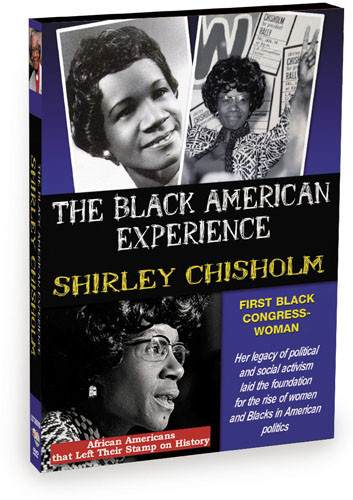 FIRST BLACK CONGRESS-WOMAN. SHIRLEY CHISHOLM born 1924 in Brooklyn, N.Y. is the first Black woman elected to the U.S. Congress and the first to campaign for the Presidency. She was an outspoken advocate for women and minorities during the seven terms she served in the House. Her legacy of political and social activism laid the foundation for the rise of women and Blacks in American politics. "Of my two "handicaps" being female put more obstacles in my path than being black." This program is a celebration of her life and a political diary from the 1960's through the 1970's during an era of political transition and social change. The range of Chisholm's activism is explored in depth through her involvement in civil rights, women's rights, and the anti-Vietnam War efforts. We witness the excitement firsthand of Chisholm announcing her candidacy for President with the Democratic Party in 1972, declaring she is not a representative solely of the black or female communities, but "a candidate of the people". Though she did not win the nomination that year, she remained active in politics and served the House of Representatives until her retirement in 1982. In this inspiring program, Shirley Chisholm emerges as a charismatic leader and social reformer that achieved positive change in American politics and society for future generations. Bonus Material: Each program includes 24 minutes of Bonus material.

Her legacy of political and social activism laid the foundation for the rise of women and Blacks in American politics.