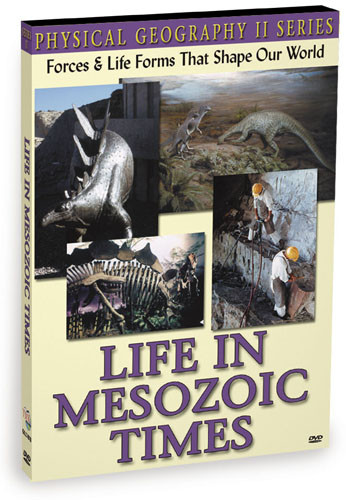 Discover The Wonders of Our Earth and the forces and life forms that shape our world with the Physical Geography Series. This program explores the major life forms, which lived during the Mesozoic Era, the time span from 245 million years ago to 65 million years ago. At the beginning of the Mesozoic Era, the major landmasses were joined together into a supercontinent called Pangaea so animals could easily move from place to place. Temperatures were much warmer than they are today and even the ice caps at the north and south poles were absent. In this environment life flourished and we saw the development of huge, reptile-like animals such as the dinosaurs. Life during Mesozoic times also occurred in the oceans and new plant forms, including flowering plants began to spread across the earth. About 65 million years ago most of the larger dinosaurs vanished and this program discusses why this "extinction event" took place.