Home History Genocide Genocide from Biblical Times through the Ages 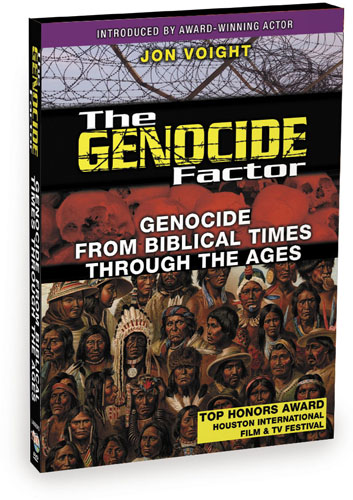 Genocide from Biblical Times through the Ages

Introduced by Academy Award-winning actor John Voight, this award-winning series presents the definitive, most comprehensive overview of the history of genocide. With the aid of an impressive array of scholars, experts, eyewitnesses, and survivors from around the world, the programs examine the complex dimensions of human nature?s darkest side. Although the term "genocide" was coined by humanitarian Rafael Lemkin in reference to the Turkish expulsion and slaughter of Armenians in the early 20th century, the phenomenon is as old as civilization. In this documentary, a variety of experts analyze Biblical accounts and some of the earliest documented examples of genocide, as in the Athenian siege of Milos in 416 BC, to explore the psychology that motivates such violence. This grim survey of history looks at the extermination of Tasmanians, Native Americans, Namibia?s Herero tribe and the Armenians. Features Nobel Laureate Elie Wiesel, former Executive Director of Amnesty International USA William Schulz and David Scheffer, who served as the first United States Ambassador-at-Large for War Crimes. Educational use price outside the USA and Canada is $99 per volume with classroom viewing rights. Home Video pricing cannot be used in any educational or institutional environments. Educational use of the Genocide Factor Programs are not available in US and Canada.

While the term "genocide" is a product of the 20th century, the phenomenon is not; massacres and brutality riddle humankind?s past. Introduced by Academy Award-winning actor John Voight, this award-winning, 4-title series presents the definitive, most comprehensive overview of the history of genocide. Each program in the series is a chilling documentary of genocide and racial murder throughout history in an effort to understand the bloody past and present and to prevent future horrors. With the aid of an impressive array of scholars, experts, eyewitnesses, and survivors from around the world, each program examines the complex dimensions of human nature?s darkest side at different times in history. The series examines atrocities from Biblical times to the present, including interviews with Holocaust survivors and a look at racism and slavery in America. Contemporary instances of genocide and ethnic cleansing include Cambodia?s Killing Fields, Indonesia and East Timor, the Sudan, Pakistan and Bangladesh, and the experience of Kurds in Iraq, Iran and Turkey. A final feature of the series looks at the mass killings in Africa, the Former Yugoslavia, Chechnya, and the Arab/Israeli conflict. Included are the events of September 11 as an illustration of some people?s desire to obliterate another group with differing world outlooks. Features interviews with Nobel Laureate Elie Wiesel and former U.S. Secretary of State Madeleine Albright, as well as testimonials from survivors of some of the world's most tragic religious and ethnic massacres - Armenia, Bosnia, East Timor, Rwanda, the Ukraine, and the Nazi Holocaust. Viewer descretion advised.

BACK TO: Genocide
NEXT TITLE