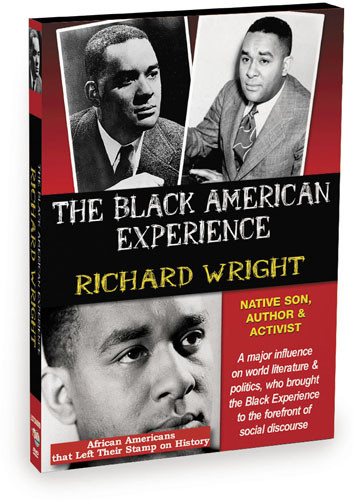 NATIVE SON, AUTHOR & ACTIVIST. RICHARD WRIGHT was an African-American author of novels, short stories and non-fiction that dealt with powerful themes and controversial topics. Much of his works concerned racial themes that helped redefine discussions of race relations in America in the mid-20th century. Born on a plantation in Mississippi, Wright was a descendent of the first slaves who arrived in Jamestown Massachusetts. This program follows his arduous path from sharecropper to literary giant. Through authors like H.L. Menken, Sinclair Lewis, Theodore Dreiser, he discovered that literature could be used as a catalyst for social change. In 1937 Wright moved to New York and his work began to garner national attention for it's political and social commentary. Much of Wright's writing focused on the African American community and experience; his novel Native Son won him a Guggenheim Fellowship and was adapted to the Broadway stage with Orson Welles directing in 1941. In 1946, Wright was fed up with America's treatment of its black citizens and became an expatriate in Paris, France where he joined a circle that included famous Existentialists Jean-Paul Sarte and Albert Camus. Though he quit his formal education at only 15 years old, Richard Wright was a major influence on world literature & politics, and brought the black experience to the forefront of social discourse. Bonus Material: Each program includes 24 minutes of Bonus material.

A major influence on world literature & politics, who brought the Black Experience to the forefront of social discourse.